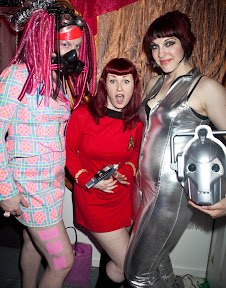 A couple of things happened to me on Twitter (where else?) today that got me thinking. When I was younger, I knew that I liked girls but never realised that I liked them enough to be labelled bi. I thought there was some kind of rule that meant you weren’t bi unless you’d been in relationships with people of more than one gender. It took a while, but eventually I realised that this was rubbish because, a) orientation is mainly about desire rather than actions, and b) there isn’t really a rule book, no matter how many people tell you otherwise. Once I’d realised that my desires didn’t just relate to one gender, I decided to adopt the label of bisexual for myself. Earlier last year, I pondered the meaning of the word queer and whether or not it applied to me, but I’d not really given it much thought since then. After all, I may lust after women, men, trans women, trans men, androgynous genderqueers and – much like Captain Jack Harkness – pretty much anyone who falls into my broad definition of ‘hot’, but The Bisexual Index’s FAQ has a very nifty section explaining how you can still be bi even if you don’t believe in the gender binary. Case closed.

I forgot all about it, until a friend posted the following on Twitter today: “I suddenly kind of wish I’d gone to BiCon just to learn how to properly identify as bisexual. Feel like I lack identity and don’t belong.” I’ve pondered going to BiCon a few times for this very same reason, but I’m not entirely sure that I’d fit in there. I went to one bi meet up at a pub a few years back and, do you know what? They were all very nice, but I didn’t really feel like they were my kind of people. There were no fantastic outfits or crazy hair colours, no amazing make-up, no feeling of creativity and enthusiasm for the silly side of life. Give me nerds or queers any day (ideally both!) and I’ll have a massive grin on my face. I feel like I belong when I’m at Festival of the Spoken Nerd. I feel like I belong when I’m amongst rowdy friends at the RVT. Another friend posted a link to Effing Dykes’ post about FemmeCon and I realised that I’d totally fit in there. I’d not figured out that the way I embrace feminine clothing could be anything other than ‘disguising myself as straight’. I’d not realised that this might actually be my gang. I feel like such an idiot for not working this out before!

If anyone needs me, I’ll be shopping for some gigantic earrings and picking up my brainy specs from the optician.

Image by the fabulous Ben Hopper.