Feminism Friday: How To Be A Woman 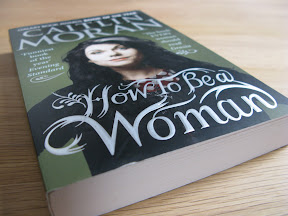 In case you hadn’t noticed, everyone’s favourite strident feminist with a fondness for capital letters has now gone global. Caitlin Moran’s How To Be A Woman is now available in 17 countries, and there’s even a movie in the pipeline. Not only does this mean that more people will get to read Moran’s hilariously written life story, and more media outlets will discuss feminism and its relevance in 2012, but it also gives us quirky girls hope. In a great interview with The Daily Beast, Moran talks about how scary the word feminism can be to some, and how she can now be herself.

I come from quite an odd background: insane hippies who home-educated us and never let us out of the house. So being a columnist at the Times—the newspaper of bankers and high-court judges—I’ve spent the last 20 years pretending to be normal. And then when you write a book that’s basically full of admissions that, you know, you had your first wank while thinking about Chevy Chase or your dog ate your sanitary pad, and people like it, then you think, “Wow, if you like that weird stuff, I can do more of that!” I can now take off my normal clothes and reveal that I was quite weird all along.

We don’t need to pretend any more. We can proudly declare “I AM A FEMINIST!” and discuss all sorts of subjects related to what it means to be a woman in the 21st century. Moran has opened many people’s eyes to the scope of feminism and how it touches all our lives. In 2003, I wrote about how feminism could do with a poster girl to improve its image and show the doubters it’s OK to care about that kind of thing. Little did I know that a round faced down-to-earth British journalist would be the one to step up and take on that challenge. Caitlin Moran, I salute you!