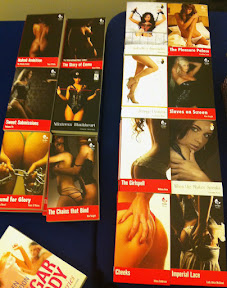 Have you ever noticed how the covers of erotic novels are, to put it bluntly, a bit fucking sexist? Despite the fact that many of these stories sexualise men for the titillation of women, the images that appear on the covers mostly appear to objectify women. Even though heterosexual women enjoy looking at men, apparently having men on the covers would make these books look “a bit too gay”. Come on! Does no one read a synopsis before buying a book these days? Would a photo of a hot guy really put women off buying them when the story is actually partly about a hot guy? This image was snapped on the bookstall at Eroticon last weekend and I was particularly taken with Josephine Scott’s When The Master Speaks which has an image of a woman on the cover, rather than the dominant male who is so clearly the focus of the story. In addition, any good submissive would know not to play with their Master’s toys. Tsk.

I know publishers often have to rely on stock images for covers like these, but surely someone must be taking fantastic photos of hot men that they can use too? We see enough tits and ass staring at us from billboards every day, without publishers doing the same thing. I just don’t get why, if you’re selling erotica to (mostly heterosexual) women, you would put so many women on the covers. So many female body parts. Looks like any photographers specialising in erotic images of men could make a nice profit from stock photography, if only the publishers would take a chance.