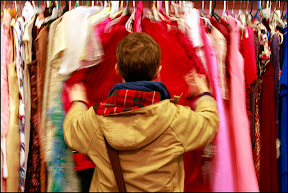 For a while I have been considering writing a piece that combines two of my favourite subjects: vintage fashion and feminism. Then, a couple of weeks ago, Retro Chick wrote a fantastic article about her feelings on how a “vintage” style and identity relates to feminism. That post was inspired by Lena from Style High Club asking if vintage girls were inherently feminist. I read, absorbed and commented, assuming that the time had now passed for me to cover the subject because… what else was there left to say? Well, encouraged by Gemma and Naomi on Twitter, I have now decided to add my perspective to the discussion.

Anyone who chooses a style of dress because it suits them, rather than because it is currently fashionable, could be considered to be adhering to feminist values. Instead of buying in to mainstream society’s ideals of what is beautiful, these people are creating their a fashion identity based on their own personal desires. While some women believe that fake tan, short skirts and vertiginous platform stilettos are utterly essential in today’s somewhat porn-influenced society, others opt to find a look that they actually feel comfortable and confident in. Whether that’s 40s factory worker, 50s housewife, 60s dolly bird, 70s free spirit or 80s goth, being inspired by fashions of the past needn’t come with an infusion of the politics of the day. These days, any one of those looks can be viewed as a big ‘fuck you’ to mainstream fashion and the corporations which support it. After all, wearing a demure 1950s prom dress could make you look like a doormat of a woman, but only if you behave like one too. Don’t dismiss the modern chap either. He may wear tweed and smoke a pipe like the misogynist fellas of yesteryear, but is probably also quite likely to have far more respect for women than his football shirt wearing counterpart. 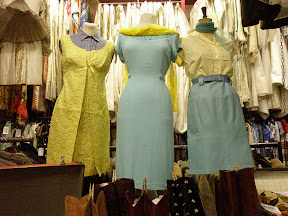 There are plenty of reasons to believe that adopting a vintage style might imply that someone holds feminist views. I believe that many, if not all, women who adopt a vintage look do so because they want to. Not just because they felt pressure to conform, because they want men to view them as attractive, or because Grazia magazine told them to wear it. In essence, someone who dresses like an individual probably thinks like one too. There are also many reasons why buying vintage might be considered to be a feminist act of rebellion. After all, buying vintage or vintage-style items often involves supporting small and ethical businesses. By its very nature vintage is ethical fashion – reusing and recycling existing garments and accessories rather than producing new ones is sustainable fashion at it’s best. Vintage-style items are most often found away from the high street and are made in smaller quantities by people who love what they do. In addition, many of these business owners are women. Sticking it to The Man by supporting small businesses rather than giant tax-avoiding corporations is something that many feminists would be proud of you for.

That said, whether you choose your clothes from vintage boutiques, designer stores, or cheap high street chains, it’s how you put everything together that speaks volumes about who you are. Vintage-wearing folk may be more likely to be feminist than girls who conform to a more mainstream stereotype and, for example, dress like The Saturdays, but they too may be simply following a fashion. I have met people who buy their clothing predominantly from Primark and H&M who have amazing personal style and will always stand up for what they believe. I have also encountered vintage-wearing ladies who genuinely think it would be rather lovely to live in the 1950s, when a woman’s place was in the home. I think the key here is to assume nothing about people until you hear what they have to say. A picture may be worth a thousand words, but sometimes things get lost in translation.