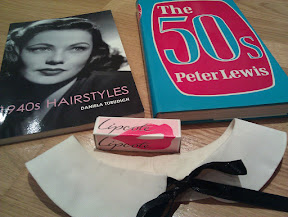 It’s time for the second of my clear out giveaways, and today’s prize might be useful to those of you with an interest in vintage fashion. The main part of this prize is a fantastic book called “1940s Hairstyles” by Daniela Turudich that has a great step-by-step guide to recreating loads of vintage looks. I don’t have the energy to spend this much time on my own hair and so decided that the book needed to go to a better home. I was initially thinking of trying to sell it on Amazon Marketplace because copies of the original are listing for £80-200, but the second edition (RRP £16) is due out in May so I doubt anyone will actually be willing to pay that much for those copies! Also in the picture are a bottle of Lipcote, to seal your lippy firmly in place, plus a vintage Peter Pan collar that I attached ribbon to before realising that it doesn’t actually go with anything I wear. I have also included a book about the 1950s that was published in 1978, so that one’s doubly vintage!

If you are interested in winning this little nod to the past, just leave a comment below before midnight on Tuesday. I shall put every commenter’s name in a hat and will announce the winner next Wednesday. Good luck!