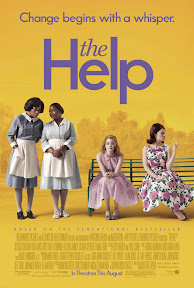 Last week I found myself at a loose end one evening. It’s been so long since I last had a few hours to myself where going home was not an option, that I really didn’t know what to do with myself. I asked around and none of my friends were available, so I racked my brain to think of social spaces that would be open late on a Wednesday evening. Then it hit me… why didn’t I go to the cinema? I couldn’t believe I’d not thought of it sooner! I’d only been to see two movies on my own ever – Shaun of the Dead, for something like the fifth time, and Control – so what was going to be the subject of my third solo outing? The obvious choices would be the types of film that my partner might not want to go and see, so My Week With Marilyn was top of my list. However, that wasn’t released in the UK for another two days, so I decided to go with a movie that I had read very little about: The Help.

All I knew when I walked into the cinema and took my seat was that The Help was based on a book of true stories from African-American maids working for white Mississippi families in the 1960s. I was prepared for a depiction of a world very different from my own and I was prepared for some awful racist language but, sat with a diverse audience in east London, I was not prepared for just how shocking the first hour was going to be in that regard. I know these were only actors, but I felt horrified at some of the things these white people on the screen were saying. How on earth did people believe this sort of thing and talk that way, so openly, about other human beings? The 1960s isn’t really that long ago either. It was quite uncomfortable to see the recent past so lovingly depicted visually, like so many beloved television dramas, but with the added reality shock of racist attitudes not softened for our modern sensibilities. I guess it shows just how far our society has come in those last 50 years.

I don’t need to tell you about the storyline of this movie, as there are plenty of reviews that have already done that. I can’t really talk about how accurate – or not – the portrayal of attitudes to race were for the time and place. What I do want to talk about though is the women in this movie. The performances were amazing and the story had me hooked from the start, but what really struck me afterwards was that all of the main characters were women. Absolutely all of them. Where most mainstream Hollywood movies have, at best, one half-decent role in them for a female actress, this film was jam-packed with them. Women of all ages too. And, even more surprisingly, the male characters were reduced to bit parts and classic disposable ‘love interest’. The best part was that I actually didn’t notice all this until afterwards. At no point was I smugly thinking “it’s a feminist movie about women and their lives!” because it was simply a story about people. Great characters, both bad and good, depicted via moving performances – we really need more of this sort of thing on the big screen.