30 Years of Self Expression 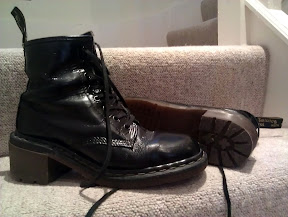 When I moved to Manchester in 1994, one of the things I loved most about the city to begin with was the shopping. As a textile design student, I decided early on that any time spent wandering around shops was vital for my degree, and so a spot of ‘research’ would happen on a reasonably regular basis. One of my favourite places to visit in those days was the Schuh store on Market Street which, to my provincial shoe-obsessive eyes, was a symbol of all that was great about living in a city. I’d never seen anything quite like it before. There were so many gorgeous flats, heels, trainers and boots… all fashion forward and all reasonably affordable. I bought many pairs from that store in my student years but the ones that stick in my head the most, partly because I still have them, are my heeled Dr Marten boots. They were made of navy leather and have survived many a snowy winter, plus me painting them with black shoe dye to go with a clubbing outfit. Despite not really being a Docs kinda girl, I still love those crazy boots. 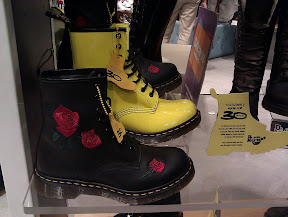 Schuh are now 30 years old. They opened their first store in Edinburgh back in 1981, and their philosophy was simple: “To provide individual high fashion footwear, sold in a unique and exciting retail environment”. If my first impressions of their Manchester store are anything to go by, they were sticking to those ideals in the 1990s, and they’re definitely sticking to them now. I defy anyone to walk into a Schuh store and not go “ooh!’ at something. I did this just last week as they have a handful of exclusive 30th birthday design collaborations with some great brands, including the only Docs that have tempted me since I purchased my 90s pair. Embroidered with red roses? I must have them.

To celebrate three decades of bringing fantastically fashionable footwear to the high streets of the UK, Schuh’s birthday campaign is called ’30 Years of Self Expression’ and covers all aspects of youth culture from 1981 to the present day. The website has an interactive timeline of the last 30 years of popular culture where you can add your memories, thoughts and pictures. There will be a party too, with celebrations in store on the 29th and 30th October, which will include the obligatory birthday presents. Every customer who buys over those two days will receive a gift, and it might not be something really tiny either. You might end up with a specially branded Schuh iPad with 30 years of film and music on it, an exclusive iPod, or free shoes for a year! I think I need to set a reminder in my calendar to go and get myself a pair of those boots. Let’s hope they don’t sell out before then.