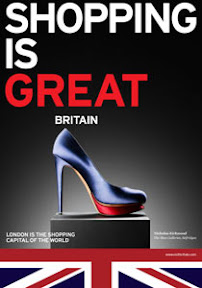 Gender stereotypes and advertising go together so well, don’t they? After all, if people complain about them it just generates more publicity, right? OK, so that may not be how advertising agencies actually work, but sometimes I really do wonder. Over on The Guardian’s Women’s Blog this week, Bim Adewunmi points out the lack of women in the posters for the new “GREAT Britain” campaign. This is indeed a fair point (and I totally agree with her when she says they missed a trick by not using an image of the Duchess of Cambridge). However, the thing that most stands out to me in the poster they feature is that it sums up shopping with a gender stereotype. Yes, it is pretty much the only mention of women in the campaign, but there is a bigger story about the campaign itself. David Cameron told us we live in “Broken Britain”, and now he’s announcing to the rest of the world that it’s “GREAT Britain”? No, I don’t really care that much for the campaign at all, but the tired old use of gender stereotyping did bug me quite a bit.

Selecting an image of a high-heeled shoe to illustrate shopping is really quite lazy. Why not some generic yet classy shopping bags? Or a bright and airy mall interior? Instead it looks like they’ve just assumed shopping is “what girls do” and then selected the first Sex-and-the-City-esque image that came up on Google. If you want to get people to spend more money, Mr Cameron, perhaps you should appeal to PEOPLE to do that? Mind you, I am grateful for one thing. At least they didn’t go with anything along the lines of the image that the Daily Fail use to advertise their Femail section. A stiletto and lipstick? Yes, because you’re worth it, dear.