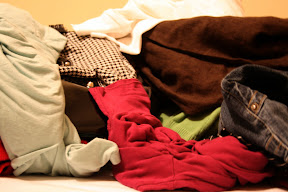 The idea behind a clothes swap party is simple. Collect up all the clothing you don’t wear any more, take the garments to someone’s house with a load of other friends who have all had a wardrobe clear out too, open some wine and start trying things on. The group of women you get together for one of these events don’t even need to be the same shape or size, as everyone has things in their wardrobe that are no longer worn because they don’t fit, and so the only thing to bear in mind is that everyone needs to get along for it to be a really fun night. Also, anyone who is scared of trying things on in front of others might find it a tad daunting! However, once you’ve found a date that as many of those people as possible are free on, you can watch your old well-loved clothing go to appreciative new homes and also get some fantastic ‘new’ freebies for yourself.

I organised a clothes swap that happened on Monday – at a very kind friend’s house because some people couldn’t make the trek out to my place so laden down with bags – and it was a resounding success. Dresses that appeared at first to fit no one managed to eventually find homes, accessories inspired new outfits, old jeans found new life, and there was almost a fight over a beret. We roared with laughter as everyone tried on the the silver lurex body stocking and began to fall in love with it, giggled at the attempts to wiggle out of various vintage dresses, and genuinely loved all the things we went home with. This sort of thing isn’t for shrinking violets as you have to stay in the room in your undies in order to grab and try on as much as possible before it gets claimed, but it is rather good for a confidence boost as everyone tried on at least one thing that we all went “ooh!” at and told them they simply had to keep it.

So, ask around to see if your friends are interested in swapping old clothes with you. It’s a great way to spend an evening and certainly much cheaper than a shopping spree. Well… I guess that all depends on how much wine you drink!