By Lori Smith June 7, 2011 in Featured, Feminism, Gender No Comments

Get your SlutWalk facts straight! 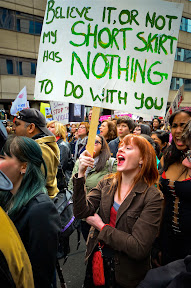 As you may have heard, Toronto police officer Michael Sanguinetti told students at Osgoode Hall Law School that, “women should avoid dressing like sluts in order not to be victimised” and, within a few months, Slutwalks had been organised in many cities across Canada and the US in response to his comments. Despite the name, SlutWalks are not saying there’s a link between sexually alluring clothing and rape or encouraging it – quite the opposite in fact! People organising and taking part in the walks know that there are many people who share Sanguinetti’s uneducated view and it is these people who spread the myth that women who are sexually assaulted somehow ‘asked for it’ by wearing provocative clothing. The walks are there to protest at the victim-blaming rape culture of western society.

Pretty soon after that SlutWalks began happening in the UK too. According to The Guardian, “Organisers say they are protesting against a culture which puts the blame for rape and sexual assault on to the victim, makes women less likely to report rape and contributes to low conviction rates for those accused of rape and sexual assault.” How could anyone possibly think that this is a bad thing? OK, so the use of the word slut and its reclaiming is something I personally have no issue with, but surely others can look past a name and get hold of a few facts before judging the motives of the movement? SlutWalk Toronto‘s incredibly interesting about page has the following to say:

“Being assaulted isn’t about what you wear; it’s not even about sex; but using a pejorative term to rationalize inexcusable behaviour creates an environment in which it’s okay to blame the victim […] We are tired of being oppressed by slut-shaming; of being judged by our sexuality and feeling unsafe as a result. Being in charge of our sexual lives should not mean that we are opening ourselves to an expectation of violence, regardless if we participate in sex for pleasure or work. No one should equate enjoying sex with attracting sexual assault.”

So, there you go. Some SlutWalkers may be there to reclaim ‘slut’ from the haters, but all will be there to say that rape is not OK, and neither is blaming the victim. No one deserves to be raped. Whatever your thoughts on the walks themselves, surely it’s amazing that so many people are talking about such a serious emotive subject as a result?