By Lori Smith April 27, 2011 in Gender, LGBTQ, Sexuality No Comments

Silence from the John Snow pub 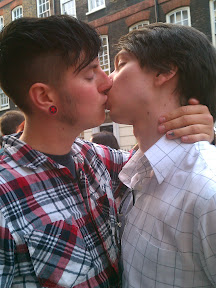 Just before the Easter weekend, a bunch of self-proclaimed “queers and allies” turned up at the John Snow pub in Soho for a second kiss-in to protest at the treatment of Jonathan Williams and James Bull.

Although not everyone who’d said they were attending on Facebook actually showed up – by quite some margin! – there were still a lot of us hanging around outside the (closed) pub for three hours, sticking posters on the doors and speaking to anyone who’d listen. There was also far more actual kissing going on than in the previous week’s media-fest, as you can see from Zefrog’s photos of the event. This seemed to draw the attention of many passers-by and a lot of folk on Twitter, even if the newspapers now seem to be somewhat bored by the story. 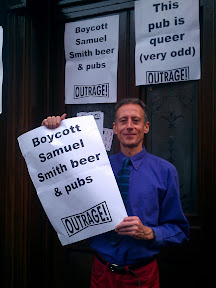 There is still no word from the landlord or the brewery on this matter and so, understandably, people are finding new ways to try and elicit a response. The latest attempt involves an online petition, so please add your name if you feel that they should explain themselves and/or apologise. The pub seems to be perfectly happy to close and lose business whenever a kiss-in is organised though, so perhaps a few more of these events are required so that they feel the pinch?

Much as I am a huge fan of kissing, I have to remind you that there is a serious point to all this so, alternatively, why not just boycott all Samuel Smith pubs? Spend a little more on your beer elsewhere people – you know it makes sense.

Images by @ladyuhuru, one of the event’s organisers.