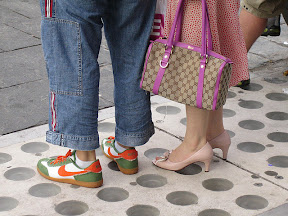 On Monday we discovered that there was a new World Scrabble Champion. I thought it was odd that the winner of a board-game championship was deemed newsworthy until I saw the accompanying photo of Mikki Nicholson in her bright pink outfit… and then read the terrible article that accompanied it in most news sources. If you are writing a story about a trans woman, why would you use the pronoun ‘he’ throughout? The Metro did it, The Sun did it, and even The Independent and The Guardian spectacularly failed to refer to Mikki’s gender correctly. Only The Guardian has since updated their piece online with a correction but, sadly, not an apology.

How much longer will some “journalists” sarcastically report a trans person’s gender in quotes while revealing what they view to be the truth in capital letters? It’s not big and it’s certainly not clever. No one’s trying to trick you – is a tiny bit of respect for other people completely beyond your capabilities? Even when writing about something they don’t understand, surely all paid journalists have a duty to get the facts straight?