Last August, I had my photo taken by Rankin as part of a massive exhibition of his work that was on show at the Old Truman Brewery for a few months. I tweeted while I waited for my turn in front of the camera, and then also after the shoot, which led to a few messages from strangers on Twitter and helped introduce me to a new friend. Claire was slightly nervous about her shoot the following day and so we got chatting about what she should expect. Afterwards, she let me know how it went and we stayed in touch, finally meeting up in person at The Rebel Rebels‘ festive burlesque show last December. Claire offered to video my act and so I handed over my camera before the show – neither of us thought this was strange behaviour for people who had technically only just met. 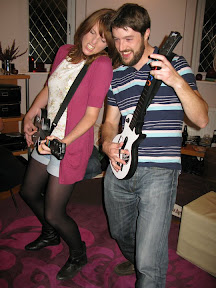 Sadly, we’re both often too busy to meet up offline and so, aside from a particularly memorable evening as part of quiz team Gin’ll Fix It for the Popbitch Pop Quiz, I usually keep in touch with Claire online. However, on Saturday she joined us in person for a house party with a cheeseboard of epic proportions plus much Guitar Hero action, and rocked into the early hours of Sunday despite being on soft drinks all night for a very splendid reason indeed. She’s not teetotal, wasn’t driving and isn’t taking antibiotics. No, Claire’s in training. On 10th October, this fantastic woman will be running a half marathon to raise money for Scope. If you could spare a bit of cash to show your support for her dedication to a good cause, pop over to Claire’s Just Giving page and help to spur her on to the finish line. A half-marathon is more miles than I’d consider walking, let alone running, so her determination amazes me. Charity donations from friends, family and colleagues managed to get me to get off my backside to walk the tiny distance of 5km, but 13 miles… that’s almost 21km!

In addition, if you have or know of any jobs that are currently available in London and require the skills of a talented writer, you should perhaps just hire Claire Nelson instead. You know it makes sense.