I had a mini-clearout at the weekend and put aside a small pile of garments to take to Bang Bang and get myself some store credit. When you don’t have much money, a clothing exchange is the perfect way to indulge your shopping habit without forking out any cash. Every time I pop in to this store I always find something exciting, so I thought I’d have a quick rummage before I left. As usual, I found an amazing selection of beautiful shoes that were too big and garments that were too small, including an amazing 1950s black dress that was a UK size 8. I found myself racking my brain to see if I knew of any London-based vintage-loving friends who were that tiny and had cash to spare. It’s always nice to see pretty things go to a good home. 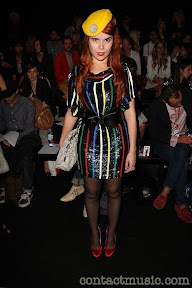 As I was about to leave, I found a cute red felt hat with a diamante brooch on the front. It was almond-shaped, well made, lined, attached to the wearer’s head with elastic, and looked like something Paloma Faith would wear. Just the sort of thing I love and, at £20, within my store account budget, but I hesitated. Do I really need another hat? Probably not as I have several and don’t really wear them as much as I should. It was labelled ‘vintage’ but it looked far too clean and new to me, so I suspected it was vintage-style and so decided to go back to my desk and check out the designer’s name, Victoria Grant, on Google. Turns out Paloma Faith does wear her hats (it was just like the one in the photo on the right, only red) and she also sells them in Coco de Mer where I’d drooled over several of them just the other week! I thought about this hat all afternoon and decided that I simply must have it.

Sadly, I returned to the shop to find out it had been sold. If only I’d put it on hold. If only I’d phoned them up when I realised what it was! Similar hats of Grant’s sell for almost £300 on Go British – why on earth did I think it’d still be there? Still, who am I kidding, I probably wouldn’t have given it a second look if it had been more then the amount I had to spend. I really don’t need another hat. Shame I still want that one really.