By Lori Smith July 4, 2010 in Fashion, Vintage No Comments What do you do when you want to get out of the house but have no cash for all the things you’d usually spend an evening doing? Well, I was at a loose end on Friday night so asked on Twitter if anyone had any suggestions of free things I could do on that evening. Before long I had an offer from vintage-loving @Sharlie_angel to join her at the V&A, where she’s a member, and get into the Grace Kelly exhibition free as her guest. The chance to meet someone I’d been chatting to online, whilst also checking out some beautiful frocks in one of my favourite museums, was just too good an opportunity to resist. 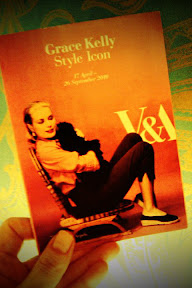 I was slightly disappointed to discover that the exhibition was set in part of the fashion galleries, which always hints to me that it’s going to be smaller than most, but we hoped there would still be plenty to see. Once we were inside we were too busy chatting to notice if there were signs directing you round the exhibition in any particular order, so we ended up seeing most of the ‘princess’ part before the ‘actress’ dresses, but it didn’t necessarily detract from our enjoyment as we both know enough about fashion to be able to identify the decade a garment was made without too much trouble. We drooled over beautiful coat-dresses, delicate hats and stylish sunglasses, marvelled at the fabrics, draping and embroidery, whilst noticing that all her outfits were impeccably stylish no matter what her age when she wore them. Of course, it must have helped being a Hollywood star and then marrying royalty, but many women with her budget still fail to reach the same level of style. Many try though, and owning the same bag is often the first step. The oversized handbag she carried to conceal her baby bump from photographers was soon named after her by Hermès and today the Kelly bag still has the longest waiting list in the world, despite prices starting from around £5,000.

We marvelled at the tiny size of the dresses and were surprised at how much better some of them looked in the photographs, where they were being worn by a real person rather than a mannequin. Kelly certainly had a fondness for particular designers, including Balenciaga and Yves Saint Laurent, and it soon became easy to spot her preferences in what she selected. Proof that, even when she was not being styled for the screen, this was a woman who knew what suited her and knew exactly what she liked. Despite all this, the one dress that really sticks in my mind was the beautiful pale blue frock that she wore in High Society. I haven’t seen that movie but, strangely, I don’t have a desire to. On leaving the exhibition, all I wanted to do was watch Rear Window again as I was reminded just what a great film it was.

The chances of me ever being as glamorous as Grace Kelly are, quite frankly, slim to none. Hell, I fail to be as well turned out as the gorgoeous Fleur De Guerre on a semi-regular basis, so I very much doubt I could manage the movie star/royalty look even for a special occasion! However, it’s inspiring to look at well-made flattering clothes and see just how good they look after all these years. For those of us who can’t afford expensive clothes, thanks to the internet we now have a wonderful variety of vintage at our fingertips, with stores like those run by Natasha Bailie and Vintage Secret helping us to create that effortless glamour on a fraction of the budget. Kelly kept the same handbag for years too, proving that selecting a well-made bag in a classic style can be far more frugal than it seems.