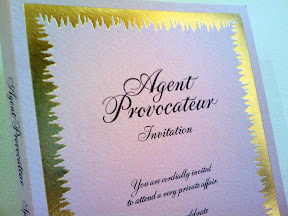 Due to a small number of purchases from their stores over the last few years, I am on the Agent Provocateur mailing list. Despite the fact that I have found far better underwear and stockings for sale elsewhere, I have refrained from un-subscribing because, well, I like looking at women in underwear. This week’s email may mean I have to revise my opinions, however, as they’ve produced some startlingly un-sexy video trailers for the AP collections. The lingerie may be hit and miss, but I’ve always loved AP’s sauciness until now. In my opinion, these videos of dead-eyed writhing models are not very sexy at all, and don’t get me started on the ribs on show in the swimwear trailer!

It’s not necessarily the lack of curves, as women of all shapes and sizes can be sexy and AP clearly don’t design for the more rounded of us anyway, it’s the vacant stares that they are assuming look hot. Tell me, what is sexy about someone who looks like they couldn’t care less? Where’s the fun in that? I like people who are enjoying themselves, or who look like they’re about to enjoy you. It’s all about the illusion of sex, and clearly AP models don’t have the skills to create that illusion. They don’t want you, they don’t want me… they don’t want anything! I think I’ll stick with Katy Perry having fun in the California Gurls video, looking like Bettie Page with a couple of cans of squirty cream, and biting the head of a gingerbread man with a saucy look in her eye. She may have thought it was all just an “experimental game” when she recorded I Kissed a Girl, but I reckon Russell Brand has opened her mind a bit since then. (nudge nudge, wink wink, say no more!)