Rape is about power, not sex Yesterday I heard about the results of a survey on rape and blame. I set my alarm to wake me up with the radio every morning and heard about it on the news but, being half asleep at the time, thought I’d better check the story online in case I’d misheard. Apparently not.

“The majority of women surveyed believed that some rape victims should take responsibility for what happened to them.” 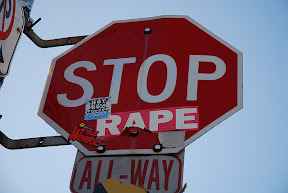 The idea that victims (usually women) are to blame in rape cases is not only offensive to women; it is also offensive to men too. It implies that men can’t help themselves and are all just aggressive Neanderthals who can and will attack others because it’s part of their nature. Individual circumstances should obviously be very carefully considered every time an accusation goes to court, and sometimes the victim may be considered to have put themselves at increased risk of attack, but the idea that victims “should take responsibility for what happened to them” equates in a lot of people’s minds to “the victim is to blame”. How is this going to help juries remain impartial? How is this going to help friends and relatives of victims to provide support when it’s most needed?

In my opinion, part of the problem is that most people think that rape is about sex, when it’s actually far more about power, and quite often, violence. When searching for other people who have written about this online, I came across and old blog post from Abstract Nonsense who shares my view that rape is a violent crime that is as enjoyable as being beaten up. Quite simply, rape is about power. In the case of an attack by someone you know (date rape), it is often a case that the woman has the power over whether or not the couple have sex, and so a rejected man may want to take that power back. Frustrating though it must be for them, thankfully most men in that situation don’t continue when told no. In the case of an attack by a stranger, it’s about exerting power over another person in the same way that any assault is. It’s not just young attractive girls in short skirts who get raped so I’m unsure as to why this idea of ‘asking for it’ has hung around. Sadly, stories like this don’t help stop the ‘women enjoy it’ myth either.

I had planned a much longer article on this for another website but am not sure I’ll have the time so, for now, why not check out this piece on Rape myths past and present from the New Statesman. It’s well worth reading.