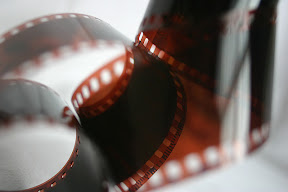 I returned from holiday and promptly spent two evenings sorting through my digital photos and getting them uploaded, tagged and labelled. I felt a nice wave of satisfaction after having been so organised but then, later in the week, remembered something. I now had three exposed films, waiting patiently to be developed. Yes, film… the 35mm stuff with sprocket holes, all curled up asleep in those little tactile canisters. One mostly contains images of Brighton, while the other two hold snippets from my time in Sweden and I don’t really have much of a clue what any of it will look like.

I actually rather like that about film. The main reason I continue to use it is that the resulting photographs are just so beautiful (especially when shot using my Lomo LC-A), but there is also the thrill of capturing something and not being able to review it straight away to see if it was worth it. Surely, if I wanted to shoot and felt the urge to press the shutter release, at that moment it was worth it? As rules 8 and 9 on the Lomographic Society‘s website state, “You don’t have to know beforehand what you captured on film […] Afterwards either.” and I mostly agree with that. OK, there are times when I get a whole roll developed to find that only one shot is any good, but there are also times when I find myself scanning all 36 prints… and I do still get prints because there is something really quite lovely about them.

In a funny way though, the best thing is the delay. One day this week I will have three packets of holiday memories arrive from the lovely people at Peak Imaging, and will get to relive those happy relaxed days all over again.