This week’s outing to see Maxïmo Park at Brixton Academy has not made it into my top five gigs list. Probably wouldn’t make it into a top ten, to be honest. Still, as I want to keep the list, ready for possible future updates (I’m looking at you Spiritualized), I thought I’d re-post it here for your perusal. 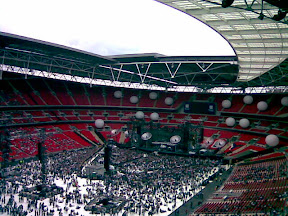 1) Muse, Wembley Stadium, June 2007
There were lights and video screens a-plenty and the band appeared in the centre of the new stadium amidst much smoke/glitter/cheering, before Muse crashed through one awesome song after another. Starting with with the tremendous Knights of Cydonia (cue thousands of people singing “you and I must fight for our rights” at the tops of their voices) and ending a full two hours later with Take a Bow, they never once looked and sounded anything other than utterly fantastic. This beats my first-time Muse live experience (MEN Arena, November 2006), and I really didn’t think that was possible. 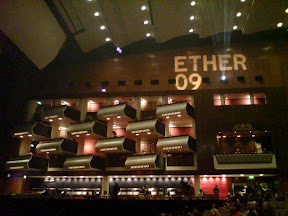 2) Royksopp, Royal Festival Hall, April 2009
Both supported and enhanced by the enigmatic Fever Ray, Royksopp looked like an Edwardian Orbital (according to the Teletext review) but they sounded far far better than that. When Robyn popped up on stage for The Girl And The Robot, I felt the same level of excitement when the Pet Shop Boys joined Electronic on stage in 1991… only this time my high wasn’t shattered by a venue with the acoustics of a multi-storey car park. If only all my favourite bands could perform in venues this perfect. Makes me wish I’d been able to get tickets to see Muse at the Royal Albert Hall.

3) Mew, Manchester Academy 2, February 2006
Gorgeous songs, perfectly performed. If I could see these guys play a slightly bigger venue with fewer tossers in the crowd, I’d be a very happy girl.

4) Depeche Mode, Crystal Palace, July 1993
Supported by the Sisters of Mercy, this was DM at their drug/alcohol/nervous breakdown fuelled best. Until concert number 1 on my list, I had never been part of a bigger crowd who were all there to see the same band. Not even for the Foo Fighters at Old Trafford. When they played ‘I Feel You’, I think I actually screamed.

5) The Darkness, Manchester Apollo, October 2003
Better than the Arena gig I saw in 2004 once they’d peaked, this concert was almost cosy because of the venue. More costume changes, more acrobatics and better sound than the arena tour. OK, so they were never going to be the best band in the world, but this gig was so enjoyable that it left me grinning like a fool for a week.

NB. These concerts were chosen for music/atmosphere/how excited I was, rather than just simply how good the musicians were. Special mentions go to Foo Fighters, Courtney Pine, The Cure and Polyphonic Spree. (I really should get round to doing a top 10 one day.)